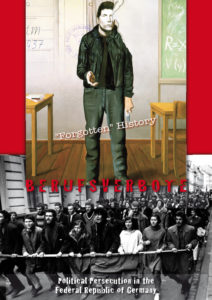 Berufsverbote
Political Persecution in the Federal Republic of Germany

At the end of the 1960s, West German politicians, lawyers, police and secret services considered how the mass protests at universities and in the workplace could be contained. In particular, the state bodies feared that a new left-wing generation of students could infiltrate state structures and change them from the inside. A Federal State working group, formed in 1971, discussed possibilities to keep left-wing critics out of public service. The measures that were taken were meant to intimidate and deter. Based on this preliminary work, the Federal State minister presidents’ conference passed the so-called “Radikalenerlass” on 28th January 1972.
The consequence of this was that about 3.5 million people were politically monitored. The secret services reported to the recruiting authorities that between 25,000 and 35,000 job applicants were suspected of being left wing. More than 10,000 Berufsverbot proceedings took place, about 2250 applicants were not
employed and 256 civil servants dismissed. The estimated number of unrecorded cases was considerably higher.
The exhibition presents the social climate at that time, whilst also referring to historical patterns and the consequences of these politics of intimidation.